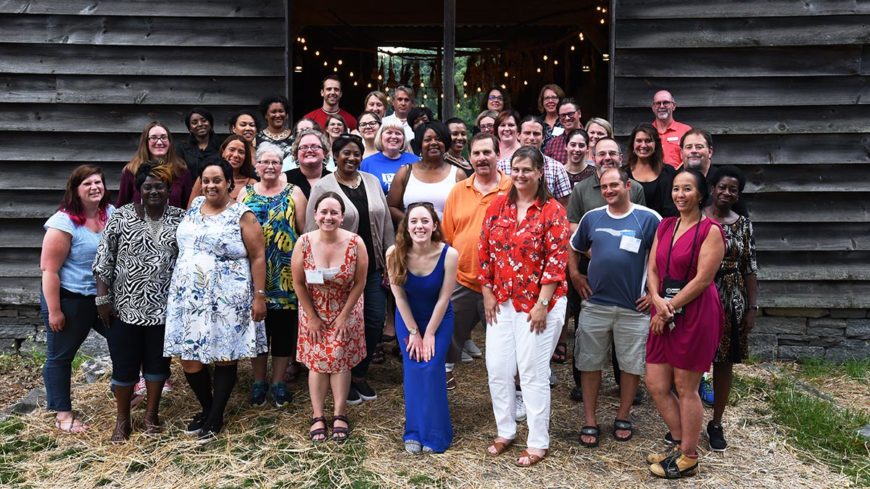 Several dozen teachers who visited Philipsburg Manor in the summer of 2017 explored the grounds of the provisioning plantation to absorb details of colonial life for their lesson plans. They noted how the manor house was managed, what herbs filled the garden and when ships laden with flour would embark on their journeys down the Atlantic coast.

Then they learned about Caesar, the enslaved miller who day after day ground wheat into a valuable commodity. They heard how young Sampson was sold at auction while his father, an enslaved farmer from the manor, watched and mourned.

“When you get into stories of the enslaved individuals – the 23 men, women and children who lived here – you think about the depth and breadth of the story,” said Michael Lord, Historic Hudson Valley’s (HHV) Director of Content and Delivery and a guest lecturer at HHV’s Teachers’ Institute.

“Right outside the mill, the teachers stood on the same soil these enslaved individuals walked across,” Lord remembered. “It becomes a visceral experience when you listen to those stories and find yourself in the same place where things occurred 250 years ago.”

With renewed funding from the National Endowment for the Humanities, HHV will host a second Teachers’ Institute this July. Another group of 36 educators from across the country will spend a week learning about slavery in the Northern colonies. The goal is to help their students rethink the typical “Gone With the Wind” concept of American slavery and discover the stories embodied in the enslaved individuals whose unpaid labor made the colonies thrive.

Feedback after the 2017 institute confirmed the need to share a holistic and truthful view of slavery’s role in the founding of America, and its particular presence in the North, Hughes said.

“Colonial America was a comfortable topic with nice lesson plans, and then we’re saying, ‘Wait a second, here’s a whole new section about the development of the colonies that has been left out,’” Hughes said. “Teachers need to know how to help their students come to terms with that.”

Guided along the way by subject matter experts and educators, teachers leave the institute with facts and figures as well as tools for implementing new lessons and addressing slavery in general.

“We recognize that it’s hard to discuss because we are still living with the repercussions of what slavery did to our country,” Hughes said. “The racism that persists makes it difficult. The policy issues that come out of it—redlining, segregation—can be hard to reconcile with our own backgrounds.”

Even people who are well-intentioned and want to talk honestly and sensitively about slavery have to face prickly, sometimes personal notions of white privilege and implicit bias. “All of this involves work and confronting issues,” Hughes said.

To provide a better sense of the region, the institute begins this year with a lecture about race and slavery in the Hudson River Valley. The focus extends throughout the week to the broader colonial North, the economic advantages and legal justifications for owning human property, and the economics of enslavement as a source of labor that produced goods and generated income from transatlantic trade.

Teachers visit Philipsburg Manor, discuss enslavement as custom and law, and learn how being defined as property rather than person affected African captives in colonial America, and impacted race relations for centuries to come. Primary documents for study include wills, inventories, newspaper advertisements, and personal narratives. Institute lessons discuss how to use historical fiction and art to build historical empathy and fill in the gaps of missing records.

There is a tour of lower Manhattan – the earliest European settlement – which juxtaposes Wall Street (so named because of the wall there built by the Dutch to keep out marauders) with the African Burial Ground, lively commerce of the piers, and the site of the city’s first slave market.

Significant time is spent teaching about slavery in the contemporary classroom and teachers prepare a final project. Also new this year, participants will be given more contemplative time to synthesize the information they receive.

“We’re making sure teachers have the head space they need to reflect on the content, to rethinking everything they understood about this timeframe,” Hughes said. “They’re absorbing a lot of difficult subjects as we try to humanize the experience of slavery.”

HHV is lucky to have so many teachers from diverse academic backgrounds committed to and interested in the institute’s focus on slavery in the North, Hughes said, adding that everyone benefits from a rich discussion.

“You can’t continue to build on the knowledge you have,” she said, “if you don’t seek and have time to process new information.”