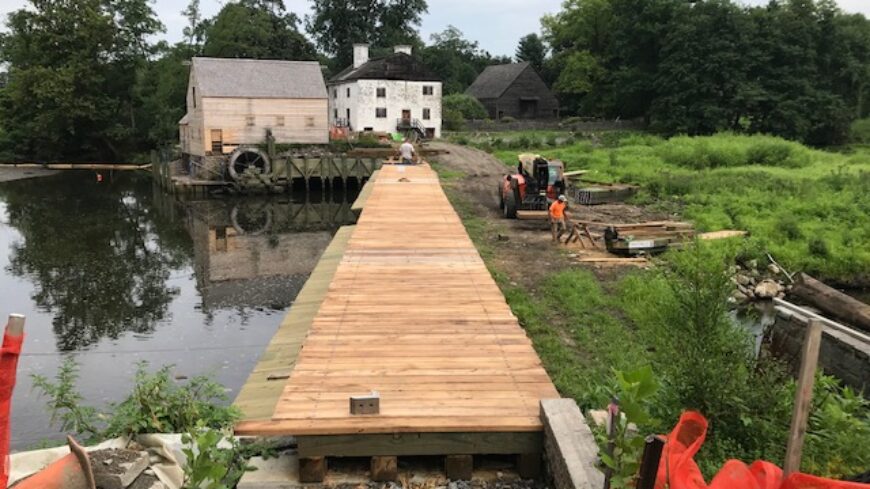 More than ever, Historic Hudson Valley (HHV) has been using materials and techniques that extend the life of our historic structures and landscapes―always with a careful eye toward accuracy.

“Given how scarce preservation dollars are these days, sustainability has become a top priority,” said Rick Torres, HHV’s Director of Buildings and Grounds. “And the more we keep rainwater away from features like porches that are particularly vulnerable to decay, as well as use rot-resistant wood species, the lower our long-term maintenance and repair costs will be.”

Below, we are excited to report on historic preservation projects that have wrapped up or are in progress at several HHV properties.

Bridge to the Past at Philipsburg Manor

Reconstruction of the pedestrian bridge at Philipsburg Manor is expected to be completed this fall, the final piece of a sweeping $3.5 million restoration project at the former milling, farming, and trading complex in Sleepy Hollow.

The 21st century incarnation of the “bridge to the past” will transport guests from the Mid-Century Modern Visitor’s Center to the heart of the historic site for tours and programs that focus on the 23 enslaved men, women, and children who lived and labored there in the 1750s.

The Pocantico River, which slices through the property, had to be dammed to allow work on submerged areas of the bridge. The project required a complex web of funding, permits, and approvals from entities including the Army Corps of Engineers and the state’s office of historic preservation.

The materials used—pressure-treated lumber for underwater supports, custom-milled black locust for the decking, and white oak for the handrails—are durable and sustainable. Engineers determined that wider spaces between the bridge bents would help prevent debris swept downriver during storms from damaging the structure. Now that all of the bridge’s main trusses are up, craftspeople will focus on building the deck and handrails.

Also key to the project, the mill building has been restored, with repairs to the Hurst frame that supports the heavy milling mechanism and new massive timbers below the building. Clapboard siding was replaced, as well as the roof, shutters, and doors. The adjacent wharf decking is being replaced with black locust boards.

On the Porch at Van Cortlandt Manor

HHV has realized its longtime goal of preserving and increasing the lifespan of the monumental porch that wraps three sides of the Van Cortlandt Manor House.

New lead-coated copper gutters, supported by hand-forged hangers, and a new underground drainage system will reduce wood rot as well as deterioration of the stone foundation caused by melting snow and rain cascading off the roof. The improvements to the Croton-on-Hudson structure that was built between 1790 and 1825 will reduce annual maintenance costs associated with constant repairs and repainting.

The next task is to replace the porch decking, the gathering spot for school groups and a focal point of pumpkin art installations during The Great Jack O’Lantern Blaze. Preservation and safety improvements were completed with the support of the Gerry Charitable Trust and the New York State Council on the Arts. The Manor House’s roof shingles were replaced as part of previous preservation projects.

In the Kitchen Yard at Sunnyside

The roof shingles on the ice house, a Gothic Revival reconstruction (after the original built in 1847), have been replaced with hardy Alaskan yellow cedar. Existing skip sheathing, which allows wooden roof shingles to dry more efficiently, was retained. The angular, low-to-the-ground building would have held tightly packed blocks of ice harvested from the nearby Little Mediterranean pond. Ice would have been used to preserve foods and make treats like ice cream.

Planning is underway to replace the roofs on the cluster of outbuildings that form the kitchen yard, hidden from view by a fence, just as they were in the 19th century. The outdoor work spaces were key to the smooth operation of the household, with the privy, dairy, and woodshed serving supporting roles in domestic life at Sunnyside.

Over the last half-dozen years, with the help of the New York State Council on the Arts, HHV has replaced the roofs and trim of the barn complex and courtyard that house the Visitor’s Center and Museum Shop. Irving’s piazza, or porch, has new, exactingly reproduced millwork that frames the view of the Hudson River.

A Walk in the Westchester County Park

Nearby to Sunnyside, HHV just completed the first phase of a long-term project that joins the popular Riverwalk, the Westchester County Park in Irvington, and the newly opened pathway on the Gov. Mario M. Cuomo Bridge. The new trail extends from the southern border of the Lyndhurst estate through the county park and hooks up with the Old Croton Aqueduct Trail near Sunnyside Lane.

The County Park, a 37-acre riverfront parcel that was protected from development by Westchester County in 2001, was the site of three 19th-century estates built by prominent New York City families. The Colonnades, Wolfert’s Dell, and Willow Brook mansions were surrounded by park-like landscapes with formal gardens, decorative ponds, and picturesque woodlands. Two adjacent estates, HHV’s Sunnyside (home of author Washington Irving) to the south and railroad magnate Jay Gould’s Lyndhurst to the north (now a property of the National Trust for Historic Preservation), contributed to a “neighborhood” that would become one of the densest concentrations of country retreats in the Hudson Valley.

In partnership with Lyndhurst, HHV raised funds, oversaw construction, and designed the pedestrian trail that offers a tranquil route through the County Park. You will also find traces of bridges, pergolas, fountains, carriage drives, and ornamental plantings that were once part of these grand estates. Be sure to check out this new extension on your next walk.

The project is supported by the Community Benefits Fund of the New NY Bridge Fund and the New York State Department of Transportation.