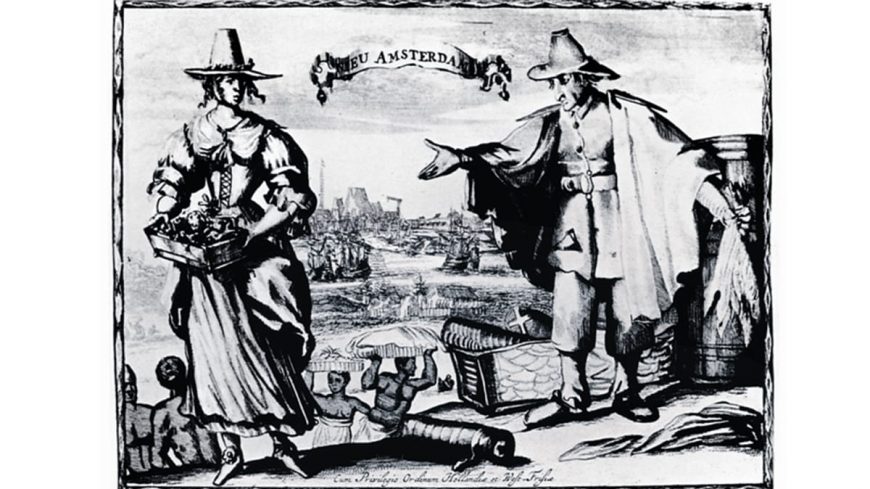 In many ways, Margaret Hardenbroeck DeVries Philipse exemplifies the colonial Dutch woman: educated, independent, and entrepreneurial. Her story illustrates the extraordinary opportunities that were available to literate, motivated Caucasian women in New Amsterdam, thanks to the rights and freedoms accorded to women under Dutch law.

As a young émigré, she served as an agent for her cousin’s shipping business, work that she continued, under her maiden name, even after her marriage to merchant Peter DeVries in 1659 and the birth of her daughter, Eva. After DeVries’ death, Philipse inherited his business, and conducted trans-Atlantic trade on her own as a “she-merchant,” acquiring additional ships as well as real estate in New York and New Jersey with her profits.

Her subsequent marriage to Frederick Philipse was strategic for them both: her fleet was used to support her husband’s international shipping and trading business. Chief among the cargoes that the Philipses shipped were enslaved Africans, and the Philipses also used enslaved labor to work their plantation and operate their mills.

At the same time that she was employing slaves, Margaret Philipse was herself becoming property: the British takeover of New Netherlands resulted in a significant loss of rights for the women of the colony, who saw their independence and agency stripped by British lawmakers. Nevertheless, Margaret Philipse continued to manage her husband’s business while raising four more children at their estates in Yonkers and New York City, and her industry helped to make her family one of the wealthiest in the region.