BY fionta
Kykuit / The Rockefeller Legacy 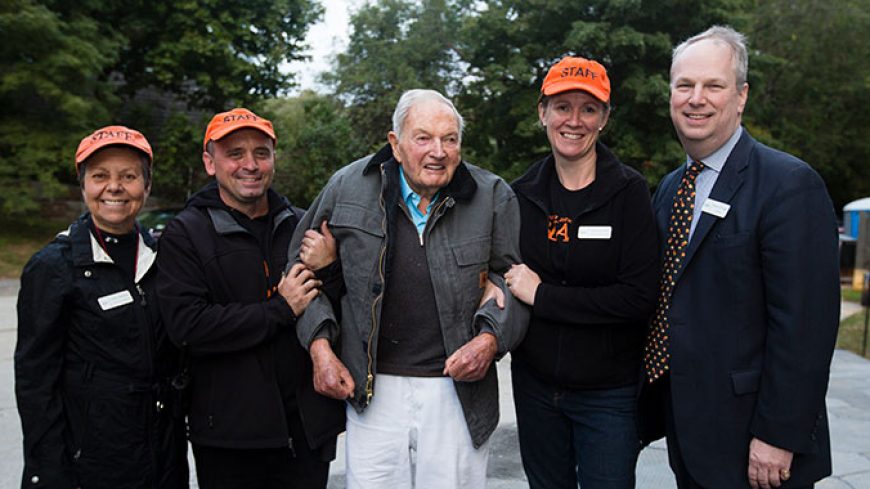 David Rockefeller Sr. died peacefully in his sleep on the morning of March 20, 2017, at his home in Pocantico Hills. He was 101.

David was a global philanthropist and titan of international business, and he will be remembered by many for all that he did in banking and around the world, but we at Historic Hudson Valley knew him as a neighbor, a supporter of our mission, and the last of his generation in our founding family — the youngest and last surviving child of John D. Rockefeller, Jr., and Abby Aldrich Rockefeller.

A guiding inspiration for our organization — founded in 1951 by David’s father, John D. Rockefeller Jr. — David served Historic Hudson Valley as a Trustee for sixteen years from 1981 to 1997, an eventful chapter in our organization’s story.

It was David’s late wife Peggy who suggested Marc Chagall as the artist to complement Matisse in designing stained glass for Union Church, beginning with the Good Samaritan window in memory of David’s father. Early in David’s tenure as an HHV Trustee, in 1984, Union Church and its windows became an historic site of HHV. A decade later, in 1994, HHV began public tours of Kykuit, the Rockefeller estate, under an arrangement among the National Trust for Historic Preservation, the Rockefeller Brothers Fund, and HHV. David took a keen interest in shaping that arrangement, and in how Kykuit would be interpreted to the public, who were being invited to visit inside the gates of the estate for the first time. Also in 1994 David became a co-founder of the Pocantico Society, an active group of annual donors to HHV that thrives today.

David’s generosity to HHV included a lead gift to help build HHV’s library and headquarters at 639 Bedford Road and annual unrestricted giving to HHV every year without exception across five decades.

Among his greatest gifts, however, has been his presence and unfailing encouragement. His most recent tour of Philipsburg Manor was in 2014, a visit he declared was “splendid,” and he was the first visitor to last October’s Great Jack O’Lantern Blaze, which for years he motored through in his golf cart, often twice in one visit, to appreciate the artistry of the carvings. He was supportive of our programs that focus on slavery in the Colonial North, of the Blaze, and the full range of HHV’s mission.

David’s passing closes a generational era for our founding family, who will celebrate his life and miss him greatly. All of us at HHV continue to be blessed by his legacy here, for which we remain grateful today and for years to come.