In his own words: HHV creates digital version of dramatic conspiracy trial

BY Karen
Tag: Slavery in the Colonial North 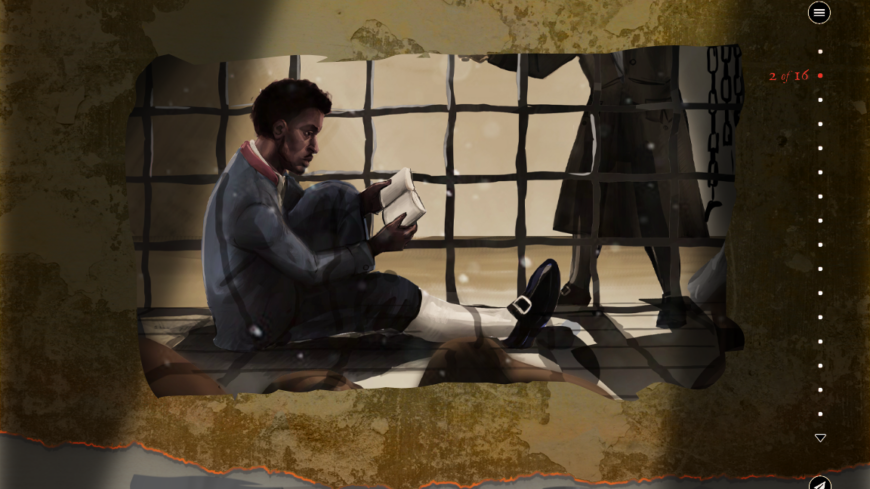 Historic Hudson Valley (HHV) is creating a digital “book” in the graphic-novel format to tell the harrowing experience of Kofi, an African man enslaved by the proprietor of Philipsburg Manor, who was burned at the stake in 18th-century New York. Using the transcripts of the 1741 Conspiracy proceedings, Kofi’s Trial is a courtroom drama that explores the essence of community, fear, equality, justice, and capital punishment.

Told from multiple perspectives and with evocative illustrations, Kofi’s ordeal is particularly relevant in light of recent and recurring fatal attacks on people of color and mounting public protests.

“While Kofi’s Trial is based on a centuries-old primary document, it is also a startlingly timely story,” said Elizabeth Bradley, HHV’s Vice President of Programs and Engagement. “Many of the same questions raised in the online novel continue to be at the heart of the American conversation.”

Kofi was the first defendant in what was called the New York Conspiracy, or the Great Negro Plot. He, his co-defendant Kwaku, and 144 other enslaved or indentured individuals who were also tried, were accused of plotting to burn the city and murder its white inhabitants. Kofi was found guilty and put to death by burning.

“How could this be justice?” Bradley said. “If Kofi was considered property by New York law, how could he simultaneously be tried and sentenced as if he were a person, with all the rights and privileges that entails? Surely the people involved in the trial were aware of this contradiction, which perfectly illustrates the paradox of American slavery.”

HHV approaches Kofi’s Trial with decades of experience presenting the history of enslavement on-site and online with sensitivity and with the support of its African American Advisory Board. The project has a direct connection to Philipsburg Manor, where the history of Northern slavery has been interpreted for the public since 1999. This reinterpretation also gave rise to a full-length museum theater production titled The Fire This Time: Cuffee’s Trial, written by HHV’s former Director of Content Development Michael A. Lord, which was the original inspiration for Kofi’s Trial.

The grave story of Kofi (anglicized as “Cuffee” by his enslaver) harkens to Maus, Art Spiegelman’s 1980 graphic novel about the Holocaust, Bradley said, which led the HHV team to create a graphic (in the design sense) or richly illustrated web-based treatment that a broad audience would find accessible and informative. HHV has received two successive grants from the National Endowment for the Humanities (NEH) to develop the concept and create a prototype. In January 2022, HHV announced an additional round of funding from the NEH to produce Kofi’s Trial over the next two years and distribute it.

“The hallmark of our work at HHV is to draw as fully as possible the experiences of individuals who were enslaved,” said Waddell Stillman, HHV’s President. “Our goal is to not only educate but to create empathy and illustrate the humanity of people whose rights were trampled.”

When completed, Kofi’s Trial will enhance HHV’s library of digital assets that include the Webby Award-winning online documentary People Not Property: Stories of Slavery in the Colonial North and the short film Runaway. Several more recent additions to the digital portfolio include blog posts about the African celebration known as Pinkster and DIY versions of the types of hands-on activities children would generally encounter during school visits, such as “tinsmithing” and baking.

Adapting the heavily biased trial narrative made by Justice Daniel Horsmanden required years of research and investigation between the lines to discover what he did not think important enough to record—chiefly the complex lives led by the enslaved African community in New York. HHV staff also tapped the vast resources collected for People Not Property to create an accurate account of the court proceedings as well as a visceral sense of what life was like for the enslaved and for the white, working-class city dwellers with whom they labored and socialized.

The graphic novel will include links to primary documents, original artwork, interviews with scholars, interactive maps, and prompts to discuss or consider privately some of the sensitive cultural and socioeconomic conditions of the time—and their ongoing implications for the social justice movement in our country.

“HHV is committed to discussing Kofi’s experience with sensitivity as we have with other projects and in our interpretive program at our historic sites,” Bradley said. “His trial illustrates the brutal injustice of slavery in New York.”