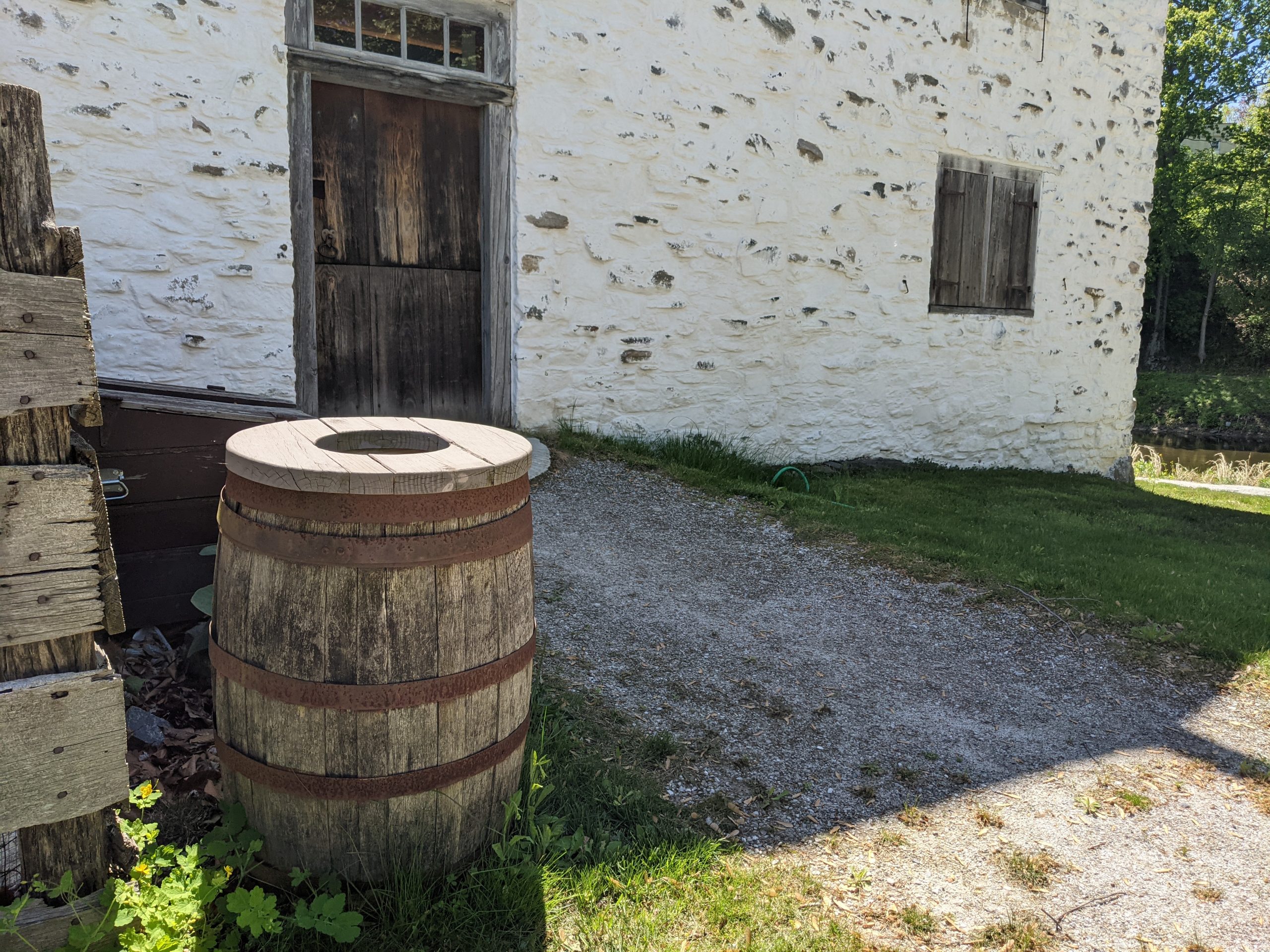 What are round, made of wood, and conveniently camouflage the modern recycling bins at Philipsburg Manor? Barrels of course, donated by Captain Lawrence Brewery of Elmsford and Mount Kisco!

The repurposed wooden vessels are right at home on the Sleepy Hollow historic site, where the grist mill in the 18th century could grind 30,000 pounds of wheat flour each week. That output required about 153 barrels holding 196 pounds apiece. Philipsburg Manor’s dairy also needed wooden containers for the process of turning milk into butter.

All the barrels, buckets, butter churns, and wash tubs—any kind of round wooden container for holding liquids or dry goods—were made by highly skilled coopers.

Using specialized blades known as drawknives and hollowing knives, coopers worked at shaving benches where they shaped rough blocks of wood into identical staves. The staves were held together by hoops (preferably wooden, especially in the case of dairy products) and joined by one head (for an open container like a bucket) or two heads (if an enclosed cask) to make a perfectly round, watertight, airtight, and vermin-proof container.

What today we generally call a barrel is more accurately a cask—a round, enclosed container with a bulge at the middle. Once used or delivered, casks could be disassembled and reused to ship other goods. One bill of lading from Philipsburg Manor refers to staves and hoops as export goods on a ship.

The term barrel had a specific definition for the tradespeople who made them. In British colonial measurements, a barrel held 36 gallons of ale. Other brewery vessels were the hogshead (the largest unit), the kilderkin, the firkin, and the gallon. Different measurements were assigned depending on the era and location, and what product (ale, wine, flour, etc.) was contained within.

The dry casks and straight-sided coopered items were most important to the commerce of Philipsburg Manor.

Who made all the casks?

The enslaved Africans of the Upper Mills in Sleepy Hollow—Caesar, Flip, Susan, Abigal, and 19 others—were forced to labor in milling, farming, dairying, and domestic tasks. Although some coopering equipment was listed on the 1750 inventory of the estate, the enslaved community alone likely did not produce the inventory of casks needed each week.

Newspaper advertisements for the lease of the Upper Mills property also do not describe any member of the enslaved community as a cooper, though other skills are listed.

A 1750 rent receipt for Philipsburg Manor tenant farmer Matthew Brandt refers to “12 cider casks”, suggesting that some tenants may have paid their rent in kind, with coopered goods.

The will of Frederick Philipse I, recorded in 1702, refers to a “Cooper’s House” as part of the his large estate in New York City, showing that just a few years after developing the Upper Mills site, the Philipses made the production of casks and other containers a priority. African men, enslaved by Philipse and his wife, Margaret Hardenbroeck, likely labored in this cooperage.

Today, the wheat flour and cornmeal produced at the Philipsburg Manor grist mill are packed in handy two-pound bags and sold in the Visitor Center. Coopered containers are still visible on the site, including water tubs and buckets on the farm and firkins and butter churns in the manor house dairy.

The new period-style barrels from Captain Lawrence are appropriately being reused—recycled if you will—just as they would have been in the colonial period.