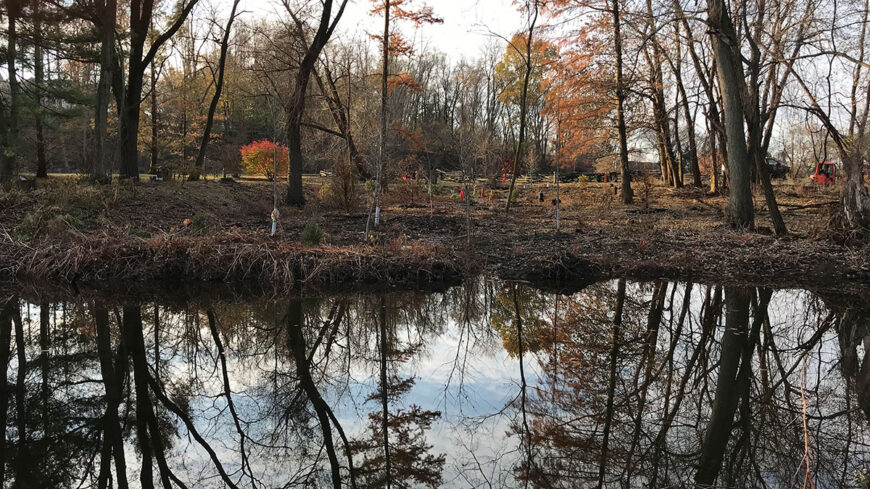 Historic Hudson Valley (HHV) recently planted more than 300 shrubs, ferns, and trees at Philipsburg Manor following the successful eradication of Japanese knotweed, an invasive that had dominated the landscape over the last decade. The effort to rid the Sleepy Hollow historic site of the invasives, which smother and rob nutrients from desired native species, was supported by a three-year grant from the New York State Department of Environmental Conservation.

But first, crews had to clear the knotweed, which covered nearly 10% of the 25-acre site. Decades of storms and hurricanes had uprooted smaller plants, shrubs and several mature willow trees along the banks of the Pocantico River. When invasives filled the void, regular landscaping couldn’t keep up.

“Invasive species are really aggressive,” said Mary Ann Witte, HHV’s landscape manager. “It’s a never-ending process and it’s our responsibility to stay on top of it.”

Crews injected herbicides into the knotweed with larger stems and sprayed smaller plants with a foliar coating. They spread seed mix over the treated area in the late fall/early winter to increase native plant diversity and discourage knotweed’s return.

For the final step, Witte, worked closely with the landscape contractor to choose and choreograph the locations of the impressive variety of native plants.

“It’s going to look fabulous with the diversity of plant materials, textures, colors, and flowering seasons” she said. “The natives are so important for providing a sustained, nourishing food for birds, butterflies, and other local species here or on migration paths.”

The knotweed is no longer visible at Philipsburg Manor, but annual inspections and treatments are scheduled to prevent reinfestation.

HHV received two additional state grants in 2019 to eradicate other invasive species from Philipsburg Manor: Porcelain-berry, Japanese stiltgrass, and Common reed. These invasives initially covered nearly 3 acres of the site, and now more than 80% have been eradicated in the first year, with complete elimination expected within six years.