Spinning Yarns: How Colonial Americans Made Textiles from Wool 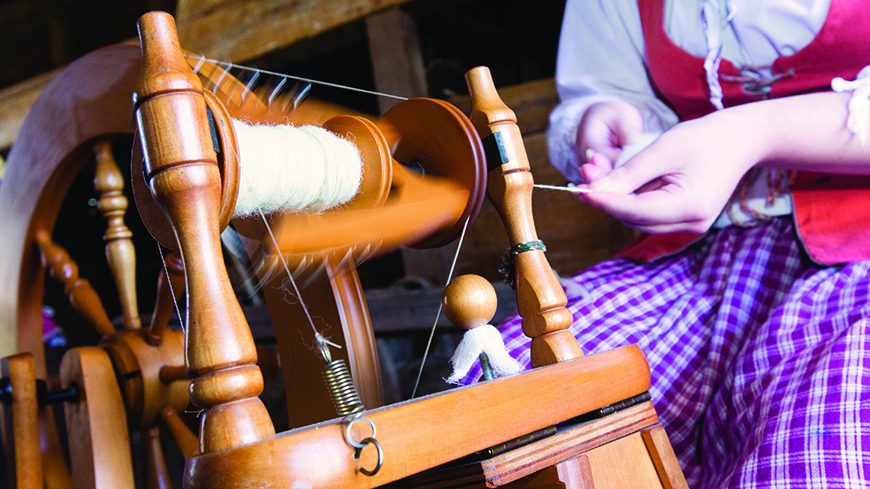 In colonial America, pre-made fabric was expensive and often not available at all. So creating textiles was a necessity for many 18th-century Americans and was a labor-intensive process.

During Sheep-to-Shawl at Philipsburg Manor, visitors get a first-hand look at how the Manor’s 18th century residents would have created textiles from wool gathered during spring sheep shearing. Interpreters, dressed in period costume, demonstrate the process, from shearing using hand shears to preparing the wool for spinning and weaving.

Here are the steps:

1. Shearing: Cutting the wool off the sheep with hand shears that look like a big pair of scissors. The goal is to remove the wool in one piece. The process does not hurt the sheep.

2. Skirting and sorting: Choosing the usable wool and discarding the unwanted pieces.

3. Washing (the only step not demonstrated at Sheep-to-Shawl): Soaking/scouring in hot soapy water and rinsing three or four times to remove lanolin oil and heavy dirt.

4. Picking: Pulling apart the fibers which releases small debris such as grass, straw, twigs, and even bugs. Picking is one of the first jobs a child can do – as young as 3 or 4 years old.

5. Carding: Brushing the fibers to remove the tangles and align the wool in a uniform direction. Carding produces what’s called a rolag, or small roll, that is ready for spinning.

6. Spinning: Twisting the wool fibers so that they form a single strand of yarn. At Sheep-to-Shawl, we demonstrate two methods: drop spindle and spinning wheel. Drop spindles can be traced back 10,000 years and are small, light, and portable. The spinning wheel probably arrived in Western Europe during the 13th century. It requires the spinner to sit and is not portable, however it produces more yarn in less time than a drop spindle.

7. Dyeing: The natural dye solution is placed in heated water and the wool skeins are submerged in the dye until the desired color is achieved. Dye colors are derived mostly from plants: leaves, nuts, flowers, roots and bark. For instance, onion skins produce a yellow or gold color. At Sheep-to-Shawl, we will also demonstrate costlier dyes such as indigo, the standard blue dye of the Colonial era, imported from the West Indies.

8. Weaving: The process of producing the cloth on a loom. Setting up the loom to weave a pattern can be a complicated process, much like a jigsaw. Yarn that is attached to the loom initially is called the warp. Warping is the hardest part of weaving because threads must be measured exactly and threaded onto the loom in proper order. Once a loom is warped, the weft threads are woven through the warp using a stick called a shuttle to create a finished piece of woven cloth.