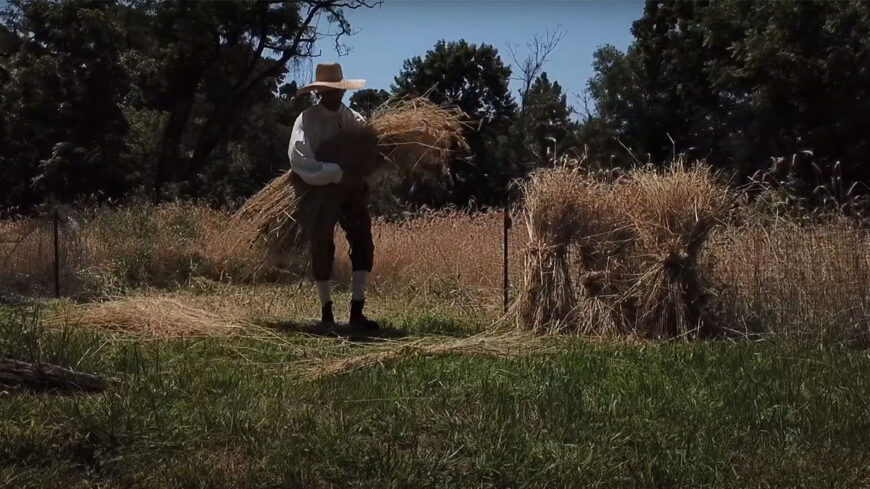 Although Philipsburg Manor is currently under construction, Historic Hudson Valley staff keeps the grounds and buildings ready for the day when visitors may return. One important annual task is the rye harvest. The rye, planted by our Grounds Department staff and harvested by Program Associates who interpret the farm and barn, is an important part of school group visits and public tours, offering a hands-on opportunity to experience 18th-century farm work.

Historically, wheat was planted at Philipsburg Manor. Rye, which is very similar in appearance to wheat, is currently planted at Philipsburg. At the barn, the rye is threshed and winnowed by touring visitors and school groups to show the process of removing seeds from the stalk. Most of the seeds were later ground into flour at the grist mill, while some seeds were kept for planting the next season’s crop. In a typical year, HHV educators grind much more than we can grow in Sleepy Hollow, and so grain for the mill is purchased from another farm. Our field today produces enough rye for a year’s worth of threshing demonstrations in the barn.

For most of the winter and spring, the rye looks like tall grass, but then around late spring a head forms on the stalk and the newly-forming seeds become apparent upon close inspection. In early July, the grain is harvested before the ripened seeds fall off the stalk. Cutting the wheat involves holding a bundle of stalks with one hand close to the ground, and cutting the stalks with a curved blade known as a sickle, held in the other hand. Carefully cutting the stalks ensures that the seeds are not knocked loose and lost to the ground. Preserving the length of the stalks allows them to be reused, for bedding in livestock stalls, in “pallets” or mattresses that served as bedding, or for making straw hats. The bundles of grains are then tied together using a few strands of stalks (they are strong enough to tie into a knot!), and carried into HHV’s barn for storage.

Philipsburg Manor in 1750 was an agri-business that reaped the profits of a provisioning plantation system. Tenant farmers were obligated to set aside certain portions of their rented farms for the growing of wheat, which had to be ground at the Philipse’s mills in Sleepy Hollow (the Upper Mills) and Yonkers (the Lower Mills). While wheat was the primary business of Philipsburg Manor, the Philipse family did not make their fortune through wheat alone.

The Philipses, including Adolph Philipse and his parents, Frederick Philipse I and Margaret Hardenbroeck Philipse, were enslavers and slave traders who profited from the sale of human beings kidnapped from Madagascar and West Africa and brought to colonial New York on Philipse family ships. They enslaved people on their New York properties, too, and the wheat grown and harvested by African captives in Westchester was sold to plantation owners in the West Indies, where it was used to feed other enslaved Africans who worked in the sugar fields there. Wheat was also traded for West Indian sugar, which the Philipses in turn sold to tenant farmers on Philipsburg Manor.

Enslaved individuals at the mill sites in Sleepy Hollow and Yonkers likely brought a deep knowledge of grain cultivation from their African kingdoms. Grass-like crops such as millet, sorghum, and barley were planted in the African continent, as well as varieties of wheat. The expertise necessary to harvest, thresh and mill these grains may have been passed down from African-born enslaved people to their descendants.At the Upper Mills location, enslaved men such as Sampson and Kaiser (whose names we know from primary documents) likely were the two farmers referenced in a 1750 advertisement for the sale of Philipsburg Manor. Among other tasks, they drove oxen and ploughs across wheat fields; later they harvested the wheat and brought it into the barn for storage and for the eventual threshing and winnowing of the grain.

At the grist mill, three other enslaved men named Caesar, Flip, and Tom would have been responsible for grinding as much as 30,000 pounds of flour per week. Caesar, believed to have been the master miller, would have operated the extremely complex grist mill, an activity that took great skill as well as strength.

Because Philipsburg Manor’s gristmill was water-powered, it could not operate when the Pocantico River froze in the winter months. At that time, the millers labored in a bake house that was on the property at that time, making ship’s biscuit, a long-lasting bread like a very hard cracker. The durability of ship’s biscuit made it a valuable trade commodity as well.

From the mill and bake house, an enslaved man named Diamond took the flour down the Hudson River to warehouses in New York City, a voyage he would have made by ship. From there, the flour was put on ocean-going vessels, and sugar, molasses, citrus fruit from the Caribbean, and assorted household goods went back up the Hudson River with Diamond, to be sold to the Philipsburg Manor tenant farmers.

In the 1750s, following the death of Adolph Philipse, the Upper Mills site was leased out by Frederick Philipse III, who also inherited and maintained the lower manor house site in Yonkers. The individuals and families who were enslaved by the Philipses were separated from one another and sold away from Philipsburg Manor. Their fates, like those of so many enslaved people, remain unknown.

Eventually, other regions of the American colonies overtook the Hudson Valley as major grain growing areas.  Today, HHV uses the rye harvest as an opportunity to reveal how the Northern colonial economy relied on slavery for its success, and as a way to build empathy with our visitors for the enslaved people who were forced to live and work at Philipsburg Manor.

Click to learn more about the enslaved community at Philipsburg Manor and about slavery in the North.