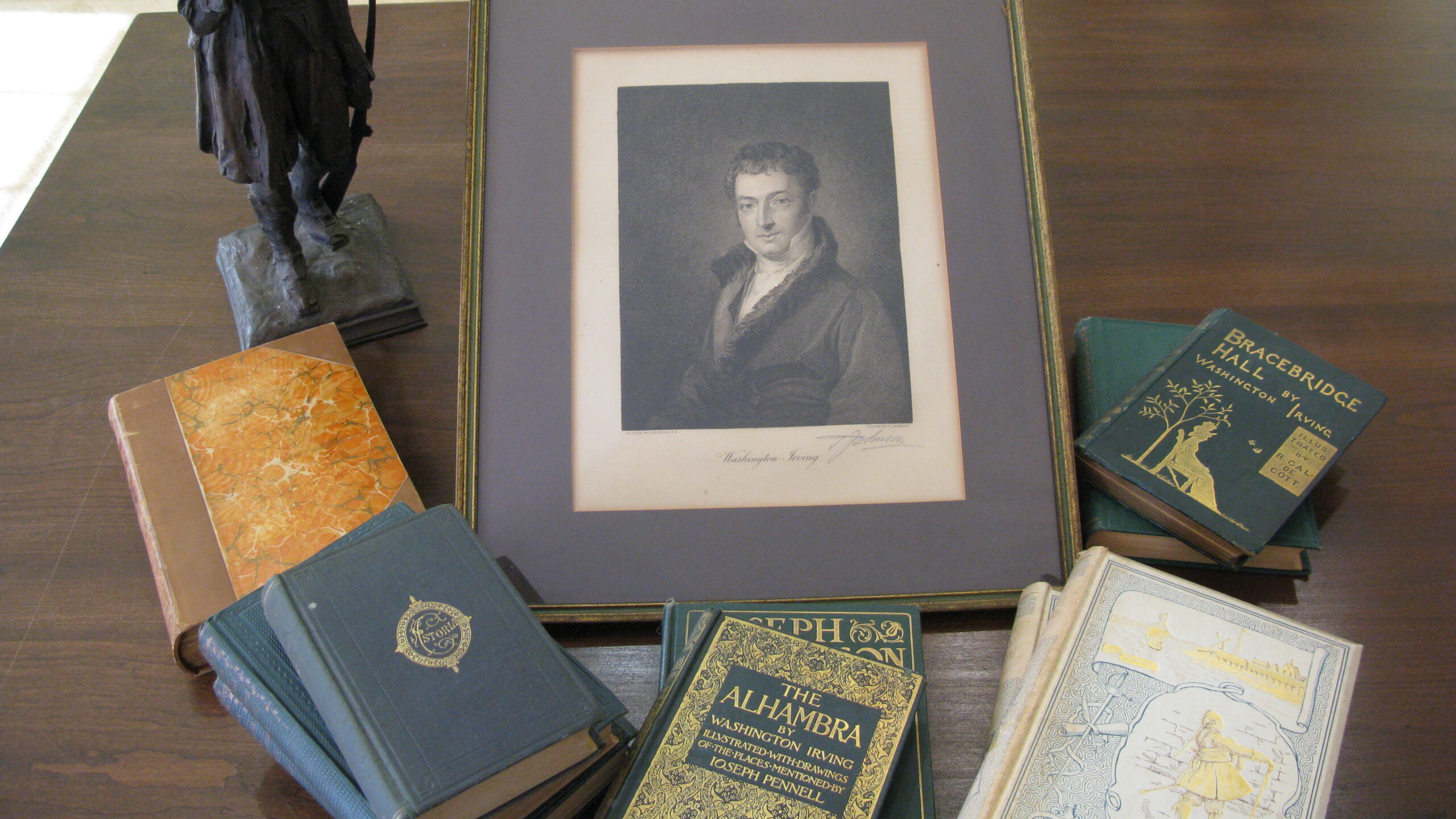 The Gift of a Lifetime

Nick Robinson “met” Washington Irving in 1971, coming face to face with the acclaimed 19th-century author during a lunch break in lower Manhattan. Irving’s “youthful eyes gazed at me from an etching for sale,” Nick said, “in a bin of unframed prints at a second-hand bookstore.”

And the rest, as they say, is history.

During the 50 years since that initial acquaintance—and acquisition—Nick grew a substantial collection of Irving books, artwork, newspaper clippings, and ephemera that is now part of Historic Hudson Valley’s library. The gift is meant to benefit future generations who will enjoy and appreciate the enormity of Washington Irving’s contributions to America’s culture and our individual lives, said Nick, the Kerlin Professor of Environmental Law Emeritus, Elisabeth Haub School of Law at Pace University. “My wife, Shelley, and I have been privileged to live amidst Irving’s legacy in so many dimensions.”

Once catalogued, the 150 books can be found via HHV’s searchable library website and WorldCat, an online database accessible to scholars around the globe. Several of the items were on view during a special Rip Van Winkle weekend at Sunnyside last fall, and future exhibitions will showcase a range of objects, most likely a rare paper program from 1900 for Joseph Jefferson’s performance of “Rip Van Winkle” at the Academy of Music in Northampton, Massachusetts.

“Jefferson was an actor and playwright, one of the biggest celebrities of the late 19th and early 20th centuries,” said Jessa Krick, HHV’s associate director of collections. “It’s like getting a ticket to see him on one of his national tours.” The program joins a painting of Jefferson in character as Rip, a costume, and several letters already in HHV’s collection.

“We are honored to accept the Robinsons’ gift and will make good use of it to interpret Irving’s life and long legacy of contributions to literature and the Hudson Valley,” Krick said. “The collection was amassed with pure love and delight for the objects and had such meaning to them. They wanted it to go to the right place, and we are thrilled.”

The Robinsons arrived in what Irving called “Sleepy Hollow country” in 1972 and soon after discovered Historic Hudson Valley (then known as Sleepy Hollow Restorations). They were frequent visitors to Sunnyside, where Shelley played harp for visitors, practiced calligraphy under a tree, and sketched the riverside landscapes.

“Irving took pride in his property nestled in a nook on the Hudson,” Nick said. “When he designed Sunnyside, he was appreciating a landscape and how a human could enjoy it without harming it.”

Though Irving was unsuccessful in his fight against the incursion of the railroad between Sunnyside and the river, he was likely one of the first people to demand that alternatives be considered before the beauty of nature is destroyed. “Now there are laws to try to avoid that kind of harm,” said Nick.

Roughly 135 years after Irving’s failure to keep the train away from his estate, Nick helped David Sive, the “father” of environmental law in the United States, fight and win a similar battle a few miles north of Sunnyside. One of the pathways for the proposed Hudson River Expressway would have paved the edge of the Hudson River, cutting off public access. It was ruled unlawful.

For many years, Irving lived unobtrusively as a literary companion in the Robinsons’ home in Sleepy Hollow—in the etching, an oil painting by Shelley, a sculpture of Rip Van Winkle, a framed original Currier & Ives print of Sunnyside, and figurines of Ichabod Crane and Brom Bones, Irving’s famous characters from “The Legend of Sleepy Hollow.” A bookcase bursting with Irving’s works included many editions that were relished not only for their stories but their bindings, paper, and illustrations. And William R. Langfeld’s “The Poems of Washington Irving” (NY Public Library 1931), an edition limited to 150 copies, contains Irving’s delightful poem “The Lay of the Sunnyside Ducks.”

Shelley said her role has been to enjoy Nick’s collection. “It’s his thing,” she said, mentioning other collections of Inuit art and the Hudson River School. “But when we had Irving spread out on our dining room table and Jessa and Catalina [Hannan] from HHV came, it was emotional to see everything in one place.”

For Nick, the connection to Irving will last a lifetime. “When I explore the world of Washington Irving, I drop into a time before we humans were irreversibly degrading nature, when the art of writing a well-turned phrase counted, when we could enjoy our human foibles and achievements, and live at a slower pace of life,” he wrote in an essay that accompanied the gift. “Irving’s legacy will sustain me further, especially in knowing that the fruits of my long engagement with the Bard of Sunnyside will be preserved in the library and archives of Historic Hudson Valley for all who wish to enter this charmed period of time.”

For information about donating to HHV’s collections or library, please email info@hudsonvalley.org.